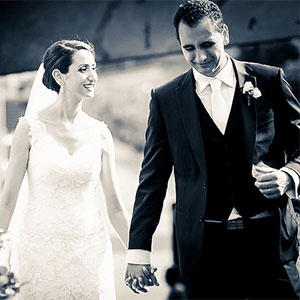 The tradition of giving gifts made of certain materials for specific wedding anniversaries dates back to 1937. This is the year when the American National Retail Jeweler Association came out with a list of gifts that included a material for each year until the 25th anniversary, and then a gift for every five years after that milestone. Before this list was released to the public, only the 1st, 5th, 10th, 15th, 20th, 25th, 50th, and 75th anniversaries had a specific type of gift associated with them. Today, the 1937 list still exists as part of the etiquette books, and the UK has a similar list with only slightly different materials.

Librarians at the Chicago Public Library recently updated the list to include specific gift suggestions that are more practical than just listing a material to use as the basis for the gift. Some of the suggestions don't conform to the materials on the 1937 list at all, but are much more in tune with the modern age. After all, who really needs paper for their 1st anniversary, iron for their 6th, or tin for their 10th (maybe a lot of people got new tin roofs for their 10th anniversaries back in the 1930's?)?

Luckily for the ladies, a lot of jewelry is included in the new Chicago list. Husbands, take note. These are the gifts your wives really want you to give them. Wives can even reciprocate. Who says men can't use a little jewelry every now and then? You can even use these gifts to celebrate the anniversaries of your engagement. Here are some of the top suggestions from the new, modernized list.

No jewelry comes into play in the modernized list until the 10th anniversary. It is at that point that diamond jewelry is suggested. The 10th anniversary is a special milestone in a marriage, and a reminder of the engagement and marriage itself can easily be accomplished with a replica of the original ring or a completely new one. However, not everyone likes diamonds, and some people believe them to lack a personal touch because they're given so commonly as romantic gifts. So why not change it up a bit? Instead of a diamond, give her a ring, a pendant, earrings, or a jeweled bracelet with her birthstone or a gem in her favorite color? It's a nice change, and one that most women (and men) will appreciate.

This opens up a lot of possibilities. The jewelry doesn't have to be expensive. It can even be costume jewelry. As long as it's fashionable, it's good. You can even buy a matching set of jewelry that she can wear out as coordinated accessories for a special occasion.

These also make a nice change to diamonds. The birthstone technique can be used here if it wasn't used on the 10th anniversary. Plus, what woman doesn't love a nice pearl necklace or set of genuine pearl earrings?

A gold chain, bracelet, hoop earrings, or simple gold band ring will all work here. No gems are required!

Other anniversaries don't specify jewelry, but do list specific jewels or precious metals to give as gifts. These can easily be made into jewelry. The 20th anniversary, for example, lists platinum as the gift to give. The diamond comes up again on the 30th anniversary. Jade is for the 35th, sapphire is the 45th, emerald is the 55th, diamond comes back again for the 60th, while a combination of diamond and gold is prescribed for the 75th, and diamond and pearl are for the 80th anniversary. Any couple who makes it that long deserves lavish gifts like these! So use your imagination, don't automatically go for the diamond (even if it's on the list, you can substitute something similar), and keep your spouse happy and feeling loved through the decades with these traditional anniversary gifts for wedding and engagement anniversaries updated for the modern age.