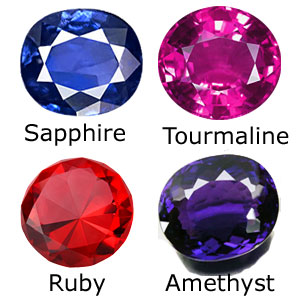 When a man proposes to a woman, he traditionally presents her with a diamond engagement ring. We've all seen the TV shows and movies where women proudly show off their engagement rings and brag about the size of their "rock." Men have been told for decades to save at least three months' worth of their salary to buy an engagement ring. This means the ring is expected to be expensive. After all, when you're asking a woman to marry you, you want her to know you're serious about your love. A giant diamond is supposed to show you put thought and effort into deciding to ask her to be your bride.

However, diamonds are not for every woman. Some women simply don't like them. Some feel they are too impersonal. Others have ethical issues with the way some diamonds are mined in certain parts of the world. Still others truly don't want their man to spend a fortune on a diamond ring and are happy with less showy and expensive displays of love. Most men know what kind of woman they're planning to marry. If you know she's not a diamond kind of girl, there are lots of alternatives.

Most engagement rings are designed around one single showpiece stone. If you've decided a diamond isn't the statement you want to make, you can still use the single stone concept. Buying a ring or having one designed especially for her with her birthstone as the centerpiece stone is an excellent and loving idea that will show you care enough to know her birthstone in the first place. A birthstone ring feels more personal than a diamond.

The engagement ring can be worn on the right or left hand. Most women will know which hand the ring looks and feels better on and will wear it there, regardless of which finger you initially use when giving it to her. Depending on the size of a woman's hands and fingers and the size of the gem you purchased, the ring may look more proportional on one hand than the other. Women will know which hand is best, so you don't have to be concerned about it.

You can also go with a gem in the woman's favorite color. Most men know what their lady's favorite color is by the time they get to the engagement phase of their relationship. Many women would prefer a ring with one single gem in their favorite color more than a ring in their birthstone, unless they are particularly fond of their birthstone. A nice touch is to accent the large showpiece gem by having it surrounded by lots of smaller gem chips in the same color or two different complimenting colors.

Finally, you could choose to give your lady a ring with a gem in a color that compliments her eyes or general coloring. This way, the ring will always match her no matter what she is wearing. Diamonds are often chosen for engagement rings because they're clear and go with everything. However, a gem in a color that matches the woman will go with everything, too, because it does with the woman herself. It doesn't matter if the gem on the ring is big or small, either. Most women today would prefer their man to get what he can afford and to not go into debt doing so. Appreciating a small stone as the most precious token of love in the world is a sign of true love from any woman.

Sapphires can be a very dark blue, to the point of seeming dense and blackish from a distance, sometimes accompanied by a blue to dull green pleochroism, which is only visible from the side in cut stones. They may also be a strong, but not too bright blue, easily recognizable from a distance, this being the real color. Other possibilities are light, usually bright, blue, with the color unevenly distributed; palish blue, or finally, blue with a violet tinge, at least in bright light. Like all corundum, sapphire always has good luster.

Probably the most affordable of the 5. In many cases, the color is fairly distinctive: it is a bit subdued, and not enlivened by bright light like ruby. When the stone is cut with the table facet perpendicular to the axis of the prism, to achieve a deeper, redder color, it shows a strange loss of transparency. Pink tourmalines are, as a rule, also rather duller than other similar gems, but may be a beautiful, brilliant violet-pink. Not a fan of the pink? There are many other colors of tourmaline Click Here To See Others.

>Rubies can often be distinguished from other red gemstones by their immediately visible characteristics: a fairly obvious pleochroism, a distinct brightening of color in strong light, the silk effect (where present), and a considerable luster.

Amethyst is the most coveted stone in the quartz group, and it is sometimes confused with beryl. It is usually found layered with milky quartz, and its color varies from purple to violet.

This spinel may be an intense, bright red like ruby, but more often may appear softer than red, as in pink-red, brick red, or almost orange. It can also have a violet tinge. Such stones were formerly referred to as Balas ruby, after the Badakshan (Balascia) region of Afghanistan where they were found.