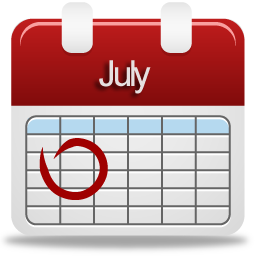 Ruby, the highly-valued red variety of corundum, is the birthstone for July. It is also known as the gem of summer, and its red rays are seen to radiate heat and intensity. Per carat it cost more than even the mighty diamond. Its associated with passion, wealth and royalty.

The Ruby replaced turquoise as the July birthstone, as the ruby brings to mind the hot climates from which these stones are unearthed. They are most often found in countries that are all lined up along the equator - Myanmar (Burma), Sri Lanka (Ceylon), and Thailand (Siam), and more recently in Africa.

Ruby reds come in different hues, and vary according to its source location, from vibrant rosy red to a deep wine red, the most desirable being the "pigeon's blood" hue typical of a Mogok ruby from Myanmar. A single ruby crystal may exhibit different colors depending on available light.

The ruby exudes a luminous glow, which was thought to be caused by a lightning, a glow that could not be concealed even by thick fabric. If thrown into water, a large enough ruby was said to transmit its heat and cause the liquid to boil. Gem dealers used to tell stories that their rubies glowed in the dark.

Ruby Or Not..Here I Come!

A ruby is equal in hardness, crystal structure, and every other physical property to its blue counterpart, sapphire. The ruby's distinctive hue comes from its chromium content and its crystals are formed as hexagonal prisms. The original ruby refers to the corundum found in the Orient. Other specimens labeled "Brazilian ruby" or "balas ruby" are actually other reddish gemstones like carnelian or tourmaline.

Hindus in India valued rubies above any other gemstone and called it "ratnaraj" (king of precious stones) and "ratnandyaka" (leader of precious stones). They also called certain rubies as "padmaraga" (red as the lotus). Dark rubies were called "male" stones, and stones of a lighter red were considered as "female." The ruby mines of Tartary were a source of abundant treasures of the Mogul emperors of India.

In Roman times, the ruby used to be classified collectively with all gemstones of red color, as "carbunculus," and was referred to by Theophrastus as "anthrax" (red coal) and by Pliny as "lychnis," since it had the quality of being very brilliant when seen under the light of a lamp. Pliny also called a brillian ruby "ceraunice." Even an extremely small but genuine ruby could sell for as much as forty gold pieces in the Roman period.

In Medieval times, the ruby was said to "surpass all other precious stones in virtue." Some soldiers had ruby stones implanted in their flesh before they went to war, as it was believed to make them invulnerable to the perils of battle.

Throughout history, several large extraordinary specimens were hailed as rubies, even mounted in crown jewels, or given as gifts between kingdoms. As mineralogy developed, many of these historic "rubies" were later found to be spinels.

Nonetheless there exist genuine natural rubies of extraordinary size and brilliance, some said to be the size of a pigeon's egg, or a hen's egg, often mounted in jewels owned by Asiatic princes, like that of the Burman Empire, or the treasury of the Shah of Persia, or the thrones of Indian princes, or those in the Imperial Crown Jewels of Russia, said to contain the finest collection of rubies ever.