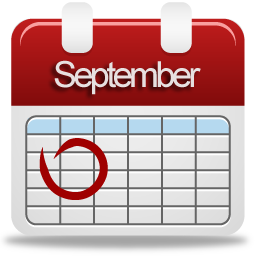 Sapphire, the deep dark blue to strong bright royal blue form of corundum, is the birthstone for September. At present sapphire refers to all variety of corundum that is not red. Thus, there are other sapphires - white (pure corundum), yellow, orange, cat's eye, and the distinctive padparadscha. But it is the blue sapphire that has been highly-valued throughout history and embodies the ideal qualities of this month.

This deep blue gem has been used by poets to capture the vision of "sapphire seas," "sapphire eyes" and the landscape of the skies and the ocean. The stone can exhibit shades of blue all the way to violet, depending on available light. According to Persian observations the world rested on a vast sapphire, and the reflection from that saphire made the sky blue.

Sapphire typifies affection that is calmer and not impetuous. It exemplifies qualities of truth, compatibility, commitment, and mutual understanding. The calm shade of blue, when worn by a man, was taken to convey wisdom and a refusal to engage in petty quarrels; and when on a woman's dress, signified loyalty in love to the point of jealousy, politeness in the face of provocation, and watchfulness. It is a gem thought to surpass all others in virtue. It was also looked upon as an emblem of chastity, so in Medieval conquests, the sapphire was appropriated for mounting in ecclesiastical rings.

Sapphire is said to derive its name from a series of historical terms, each nearly identical to its modern form, yet most often referring to other blue stones. For example, its Latin derivative "sapphirus" and the Greek word "sapheiros" was said to refer to lapis lazuli and not the corundum gem. One of the ancient terms said to refer to sapphire was "hyacinthus". Both its primitive and modern names refer to its azure color.

In the East, sapphire and other corundum gems have always been the most valued precious stones, next to the diamond. It was the same when the stone was introduced to the West. The sapphire in particular, enjoyed premier place. It was called by the ancients as the "gem of gems," the sacred stone considered most worthy as a worship offering.

Arabic writers tell of a golden ball set in sapphire, used by the Zoroastrian Magi to evoke visions or foretell the future or to intimate what events were happening from afar. Assyrian kings regarded the "elmeshu" as the most brilliant and splendid of all the stones for their amulets, being of celestial beauty.

Star sapphires were not as deep blue as the transparent sapphires, but a particularly large star sapphire was owned by the explorer Sir Richard Francis Burton, and was thought to bring good luck and was appreciated by the locals he met in his exploits.

Sapphires are often heat-treated with temperatures of 1500C-1600C and can either be turned colorless, where it can resemble the diamond, or deeper blue, when the titanium in the rutile inclusions is made to react with the iron content.

A natural sapphire's weight is measured in carats, with 5 carats equal to 1 gram. Sapphires are cut oval, cushion, pear, heart, octagon, square, marquise, cabochon. They vary in color depending mainly on their titanium and iron content, and have different predominant shades of blue depending on the country from which it is sourced.