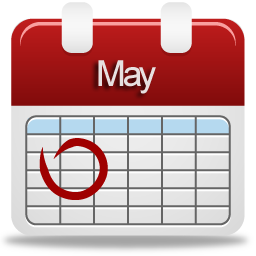 Emerald, the gemstone with a green hue all its own, is the birthstone for May. It is yet another variety of Beryl. Its distinctive color is attributed to the chromium or chrome oxide in its composition.

It is known as the "gem of spring" and has lent its color to describe the fresh young growth which appears after the cold of winter.

Mineralogists in the 19th century concluded (wrongly) that the emerald's green was derived from chlorophyll, the same substance that gave plants its color. In Roman times, the emerald was ascribed to Venus, for the regenerating aspects of nature. In Christian times, the emerald was taken to evoke resurrection, or a rebirth into a new life. It is used to signify youth, hope, joy, transitions and change. Dreaming of emeralds was said to mean there was much to look forward to, and wearing one was said to keep the wearer in a cheerful outlook.

Because of its hue, it has been used in historical records to describe all other green gemstones whenever a discovery was made including; tourmalines, jasper, nephrite jade, and even green glass. Being less hard than diamond or ruby, testing was not always the best resort, as some of the finest emeralds were ruined by those who thought that true specimens should endure the same test as that for diamond.

Where does the name come from?

The name emerald is a result of a fairly long trail of derivations, from the ancient Greek "smaragdos" (referring to all green stones) to the Latin "esmaraldus" to the Old French "esmeraude," Middle English "emeraude" and Sanskrit "marakata," all of which have connections to the sea. Theophrastus wrote that emerald must have been a product of jasper or prase, which constitutes the matrix in which emeralds are found. In Mexico, the emerald was called "Quetzalitzli" (stone of the quetzal), because it was the color of the quetzal bird's bright green feathers.

It is mentioned often in Biblical references. It is the third stone "Bareketh" in the Breastplate of the High Priest, engraved with the name of the tribe of Levi. The apostle John describes the Great White Throne as surrounded by a rainbow like an emerald. The emerald is also one of the foundation stones of the New Jerusalem.

Best of the Best

The best emeralds came from India. One of the talismans for a Mogul emperor is a whole deep green 78-carat emerald, inscribed to endow its owner with the "special protection of God." The stones themselves began to be engraved with scarabs, crosses or other sacred figures and worn as brooches during the Roman era.

But for human use, emeralds were found to be beneficial for strengthening sight. Pliny the Elder wrote that the eyes gained renewed strength by viewing an emerald, and even gem-engravers kept an emerald on their workplace to relieve the eyestrain caused by strenuous and delicate work. The Roman despot emperor Nero, who was nearsighted, used a lens cut from emerald, either to magnify views of gladiator fights, or as a concave lens to warn him of any would-be assassins.

Swallowed in powder form, or a whole emerald laid on the stomach, it was used to stimulate the appetite, as a laxative, as antidote for poisons, poisonous herbs and poisoned wounds, as a cure for fever, epilepsy, dysentery, leprosy, hemorrhages. The emerald was said to break if it could not overcome the epileptic fit.